Matt and I saw “Mean Girls” last night and loved it. I’ve long been a fan of Tina Fey; with her beauty, her intellect and her wit, she’s one of the few females out there who could probably de-gay me.

In honor of her feature-film debut (and I hope this doesn’t go too much against the spirit of the film), I present the following photo from one of my old yearbooks: 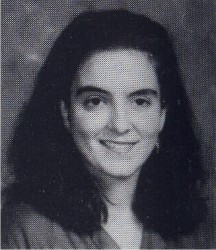 That’s Tina’s senior class photo at the University of Virginia. She graduated in 1992.

Tina and I were fellow ‘Hoos. She was a fourth-year at UVa when I was a first-year. (That’s “senior” and “freshman,” respectively, for all you non-Jeffersonians.) Although I never knew her, I was, like her, an aspiring drama geek. I performed in “Sweeney Todd” during my first year at UVa, in a cast consisting entirely of fellow first-years. That spring, I tried out for my first college-wide show, “Cabaret,” but I didn’t even make callbacks — I was that bad. (My drama career ended shortly thereafter.) In hindsight, I wish I’d made it into the show like some of my “Sweeney” comrades did, because then I might have had the chance to get to know Tina; she played the lead female character in “Cabaret,” Sally Bowles. I think I would have liked her.

Tina, congratulations on your top ranking at the box office this weekend and on your hilariously bitchy yet ultimately sweet movie. I wish you continued success at “Saturday Night Live” and in all your future projects.