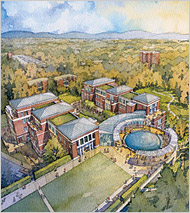 The New York Times Magazine is all about architecture this weekend, and it has a great piece about the debate at my alma mater, the University of Virginia, over plans to build an extension of the main part of the Grounds, called the Lawn. The Lawn is sacred ground at UVa. As one member of the Board of Visitors says about this project, it’s “sort of like putting a wing on the Taj Mahal.”

There’s a clash between those who want to build in a neo-Jeffersonian style, all red brick and white columns, like many other buildings that have gone up at UVa in the last 200 years, and those who want architects to try a fresh approach instead of emulating the past. They ask, “Is it desirable that a building built in 1990 be mistaken for one built in 1830? Is UVA to become a theme park of nostalgia at the service of the University’s branding?”

In delving into the debate, the author of the piece, Adam Goodheart, wonderfully explains in a nutshell the subtext of everything that’s happened at UVa in the past 30 years:

For all its tradition, the University of Virginia, more than most other institutions, suffers from a generation gap between its past and present selves. This is actually a result of its phenomenally successful transformation in the past few decades from a small, regionally-bound institution (where the first black undergraduate was admitted in 1955 and full coeducation arrived only in 1970) to a major research university with a $3 billion endowment and an increasingly diverse student body. Many of its older and wealthier alumni, then, are nostalgic for a jacket-and-tie Southern school that no longer quite exists.

While I always loved singing with the Virginia Glee Club – at 135 years old, one of the oldest existing collegiate men’s choruses in the country – I always felt a little silly when we had to meet elderly alumni and listen to them drone on about the good old days at UVa. I can be quite the misty-eyed romantic, even about UVa history, but being a (then-closeted) gay northern Jew, I always found the stereotype of the young southern gentleman – usually a guy with a first name that sounded like a last name – to stick in my craw.

There’s a middle ground. I’m against tradition for the sake of tradition. On the other hand, modern architecture doesn’t have to be ugly. It’s okay if architecture tries to make a statement, but it has to be something you can live in and with every day.

The college campus that I myself know best — Harvard’s — is in some ways the opposite of Virginia’s. Unlike the Lawn, its ancient Yard has developed through the years by a process of slow accretion: a stalwart Georgian relic here, a bit of Romanesque Revival there, a modernist folly by Le Corbusier sidling up along one edge. When I was an undergraduate there, I loved the sense of living amid a museum of three centuries of American architecture. Some buildings were closer to my heart than others, but I never thought of the new as detracting from the old. All, it seemed, were part of a continuing intellectual project; their variety was proof of its vitality.

Anyway, I’m curious about a couple of the effects of the South Lawn Project. I wonder what it will do to the Glee Club house, where I used to live. (That’s a link to the exact spot where the house is, although for some reason I had to use a different numerical address to get the correct location.) From the maps of the project, it doesn’t look like it overlaps with the house’s location, so I guess the house will continue to exist. It might have a very different character after the project is completed, though, with University buildings practically on top of it instead of a parking lot.

I also wonder what the project will do to concerts at Old Cabell Hall, at the south end of the Lawn opposite the Rotunda. Right now the windows in the Old Cabell Auditorium look out on an empty courtyard. As part of the project, New Cabell Hall, which was built behind Old Cabell, will be demolished, so the back of Old Cabell will finally be visible again. But after completion, the area behind Old Cabell (perhaps it can revert to its original name, since there will be no more New Cabell) is bound to be noisier. I wonder if they’ll soundproof the windows or something.

All I know is, I’ll definitely have to go and visit once the project is completed.