I received a real treat in the mail yesterday.

As some of you might know, Back to the Future is my favorite movie of all time. I fell in love with it at first sight in the movie theater in the summer of 1985. I was 11 years old and I went to see it with my best friend, and I was so tense during the climactic clocktower scene near the end of the movie that I literally chewed my plastic soda straw in two.

The film has a terrific score by Alan Silvestri, but the soundtrack album that came out in 1985 contains only two tracks of that score: the theme and an “overture,” which consists of several cues strung together to give a dramatic overview of the movie. The rest of the tracks are pop songs from the movie, like “The Power of Love.” It’s a fun album, but fans have wanted a release of the complete score for years. A bootleg of much of the score has been around for a while, but it’s of inferior quality and some things are missing. 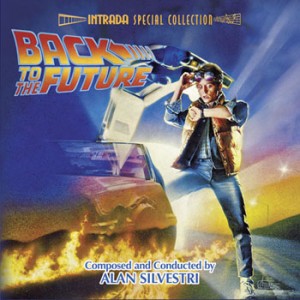 And then a couple of weeks ago, out of the blue, Intrada Records, a company specializing in movie and TV soundtracks, announced that it was releasing the complete score of the movie, made from the multi-track scoring session masters held by Universal Studios. It’s a 2-CD release: the first disc is the complete score, and the second disc is an earlier version of the score before changes were made. I ordered my copy and it arrived yesterday. In addition to the discs, it has a 24-page booklet with information about the movie, the music, and the recording, as well as several photo stills from the film.

I listened to the first disc yesterday and I was in heaven. It’s been almost a 25-year wait, and I’m so happy to have this now. Thanks, Intrada!